The Stinging Insects of North Carolina 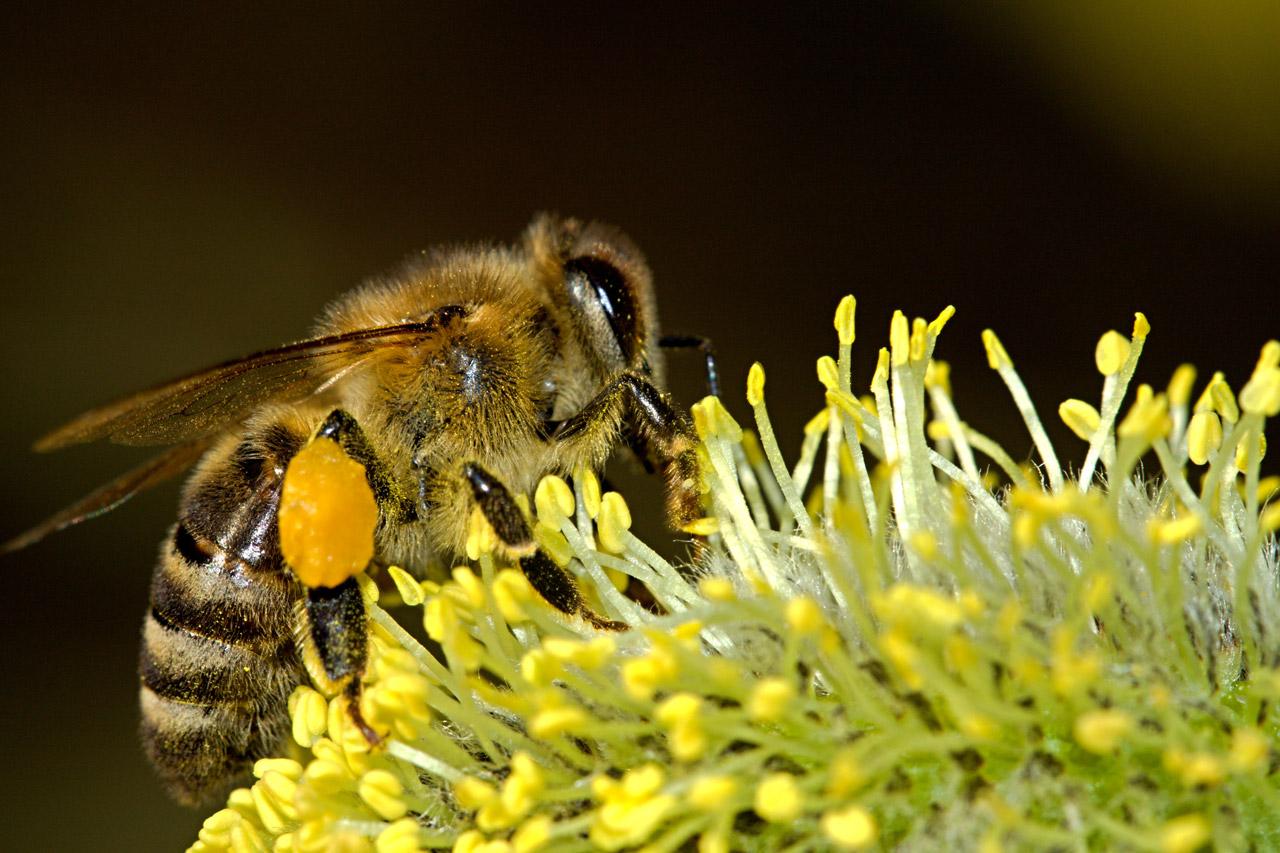 Almost everyone has experienced a bee sting or bug bite at some point in life, and it’s never fun. To help you better identify (and avoid) stinging insects, we’ve put together this round-up of the most common stinger here in North Carolina!

For most stinging insects, the most general reactions include swelling, redness, and itching. To treat a sting, carefully remove the stinger if needed, wash the sting with soap and water, apply a cold pack to reduce swelling, and take acetaminophen or ibuprofen to reduce pain or an antihistamine to reduce the chance of an allergic reaction. If any of the following symptoms develop, see a medical professional immediately: 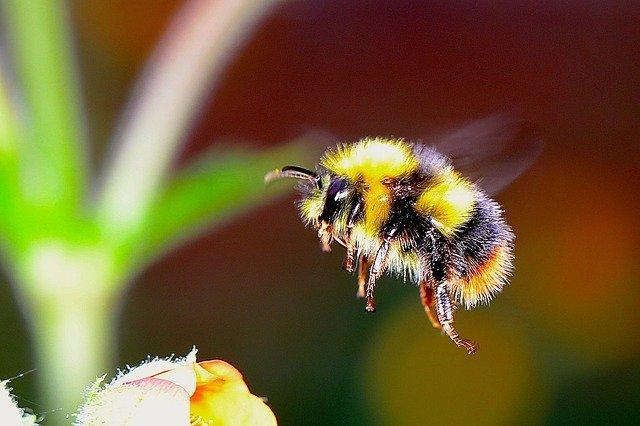 Up first is the most well-known stingers, the bumblebee! Bumblebees are generally peaceful and will only sting if they’re feeling threatened or if their hive is distributed. So, if one is flying around you (maybe smelling your perfume), try to leave it be and not swat it away. Did you know only female bees have stingers? Their smooth stingers allow them to string multiple times. Another fun fact is that bees are technically venomous, and the venom within their stinger is actually what causes your body to react.

Up next is the Bald-faced Hornet, which is closely related to the Yellow Jacket (and is not technically considered a hornet). They are black in color with a white-patterned face and long, thin, wasp-like bodies, between 1/2 and 5/8th of an inch long. Bald-faced Hornets are much more aggressive than bumblebees, so if you see an infestation, be sure to call a professional to remove them properly. You’ll know you have an infestation if you see a nest, which are “paper carton” style nests, typically found at 3 or more feet off the ground in trees, shrubs, houses, sheds, or other structures.

●     Fun fact: Bald-faced Hornets colonies can contain between 100-400 members at their peak 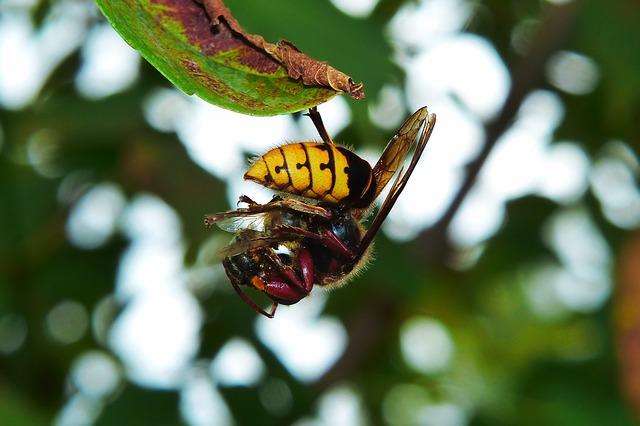 Another “hornet” common to North Carolina is the European Hornet, which is the only true hornet species found in the US. They are brown in color and large in size, ¾ and 1 ½ inch in length. Like Bald-faced Hornets, they are very aggressive. Their nests are typically located in a cavity, such as a hollow tree, wall void, or in between rocks, so definitely don’t go sticking your hands in places they don’t belong. Instead of harvesting nectar from flowers, European Hornets prey on other insects including grasshoppers, flies, Yellow Jackets, and honeybees. This helps control the population.

●     Fun fact: European Hornets were introduced from Europe to the United States in the 1800s 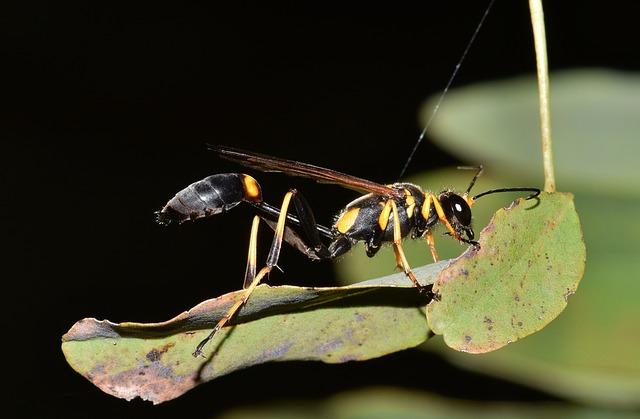 A Mud Dauber is a very unique-looking wasp, with a “thread-waisted” body, between their thorax and abdomen that causes them to look like they have been “stretched” out. They get their name from their nests that are made from mud and other natural materials. Certain types of Mud Daubers make long, tube-like nests resembling an organ pipe. Another fun fact is that, unlike most stinging insects, they are actually a solitary species, meaning they do not live in colonies or support a queen. Mud Daubers also do not defend their nests and will rarely sting.

●     Fun fact: One type of Mud Daubers is the Organ Pipe Mud Dauber that makes nests that resemble organ pipes 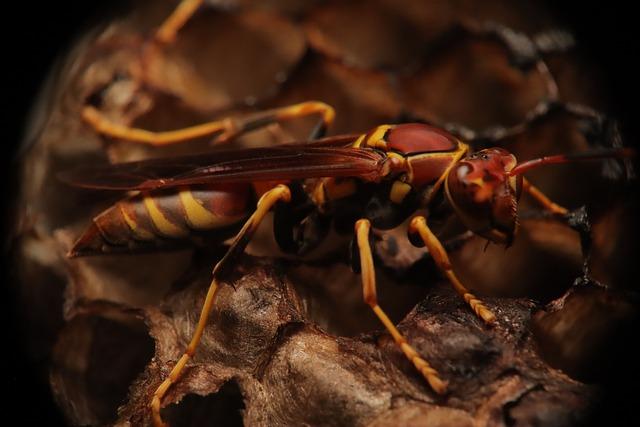 Paper Wasps have a typical wasp-like appearance with a pinched waist and long thin legs that can be seen dangling below their body as they fly. Their bodies are black or brown in color and can have orange or yellow markings with gray wings, though other species of Paper Wasps can be different colors. Their name comes from the paper-like material with which they make their nests. They’re also called the umbrella wasp for the shape of their nests. They are semi-social insects, and typically live in small colonies with a queen, but don’t follow the “worker bee” system like Bumble Bees. They eat nectar and other insects including caterpillars and flies.

In the fall, future queens will seek places to spend the winter and may find their way indoors, so make sure your house doesn't have any entry points. In the spring, they’ll emerge and build their umbrella-shaped nests, usually on branches of trees and shrubs, in porch ceilings, windows and door frames, attic rafters, and more safe places. Paper wasps are generally not aggressive but will sting if their nest is threatened.

●     Fun Fact: Paper Wasps are semi-social, meaning they live in smaller colonies than other bees Another well-known stinging insect is the Yellow Jacket. Their face is a combination of black and yellow colors, and their body has a well-defined yellow and black striped pattern. At first glance, they might look like bumblebees, but Yellow Jackets are skinnier with a segmented body with a thin waist. They will do some pollination of flowers, but they’re mainly known as being a predatory species and they prey on other insects, such as caterpillars, grubs, and flies, meaning they help control other pests in your gardens and lawns. They also love sweets and proteins, which will attract them to your summer BBQs. They’re most active in the late summer/early fall time. The colony queen will pick either an underground or aerial site to build her nest; common areas being bushes, trees, or eaves of homes. Fun fact: A colony can have up to 4,000 worker bees! Yellow Jackets tend to be territorial, so if you intrude on the entrance of their nest, they can become aggressive. Always seek professional help before trying to investigate a Yellow Jack nest. 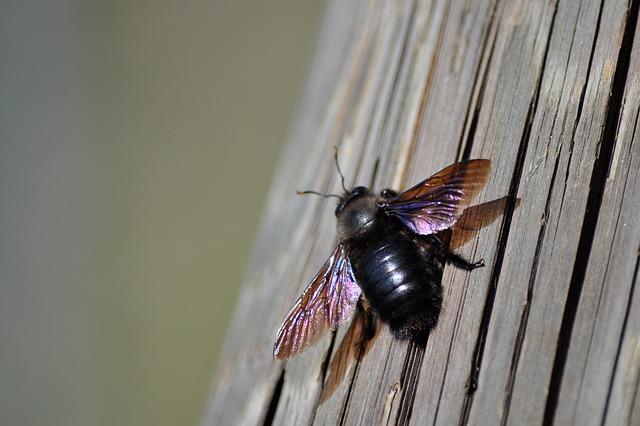 Up next is the black and yellow Carpenter Bee, which often gets mistaken for the Bumble Bee. You can tell the difference by the Carpenter Bee’s shiny, hairless abdomen, as opposed to the furry-looking Bumble. They get their name because they drill and tunnel into the wood which they use for their homes. The best sign of a Carpenter Bee infestation is round, smooth holes in wood. Carpenters prefer bare wood so painting and staining outdoor wood can help deter them. These bees are solitary and do not build traditional nests with colonies, but instead build individual nests in the wood of trees, door frames, eaves, or sides of buildings. Carpenters can cause significant structural damage on houses and buildings if felt untreated and can even attract woodpeckers that will do even more damage. Male Carpenters don’t sting, but they can be territorial and will hover around you. Females can sting, but only when provoked. So, if you spot Carpenter Bees, chances are your house is in more danger than you are. 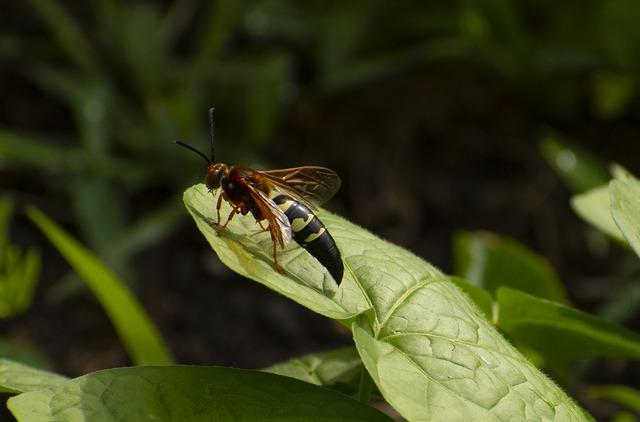 Finally, to round out this list we have the Cicada Killer Wasp! The Cicada Killer is the biggest wasp we have here in NC. They have a black abdomen with three yellow bands and a rust or brown-colored head. As the name suggests, they do hunt and eat cicadas. The females paralyze cicadas with her stinger and bring them back to her nest for her male offspring. They are solitary and the females build nest burrows in the ground, which can be up to 40 inches deep and include many different chambers. If you see dug-up dirt in vegetable gardens, flower beds, or on a brick patio, this could be a sign of a Cicada Killer tunneling in the ground. Like carpenter bees, the males cannot string. Generally, Cicada Killers are not territorial or aggressive, so you can walk by them, and they won’t take notice.

Now that we’ve learned all about the stringing insects you might come across, here are some tips to make your property less attractive to these bees and wasps.

●     Always: Check areas around the exterior of your house/property and caulk up any entry points that are found.
●     Always: Make sure that all chimneys have tight-fitting covers on them.
●     Always: Make sure that trash cans have tight-fitting lids on them to prevent stinging insects from foraging for food into them.
●     For Carpenter bees: Stain or paint wood surfaces to deter them from drilling holes.
●     For Yellow Jackets: Don’t leave sugary foods outside.
●     For Carpenter Bees & European Hornets: Remove old trees and stumps and fill in holes that could be nesting spots.
●     For Bumble Bees: Avoid wearing floral prints or perfumes when spending time outside.

To learn more about stinging insects, visit us here and check out our Home Shield packages to control bees, wasps, and other stinging insects so you and your family can feel safe and secure!