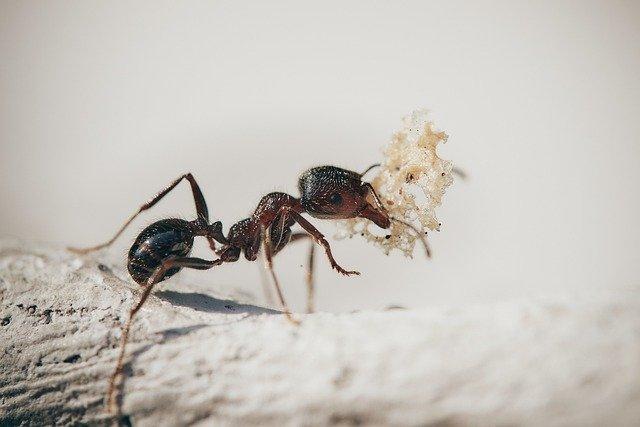 Due to their size, ants are often overlooked as nothing more than a common nuisance. But have you ever wondered how ants work? How do these colonies function together? How do they communicate? And why do they seem to be basically everywhere? In this article, we answer all those questions and more! 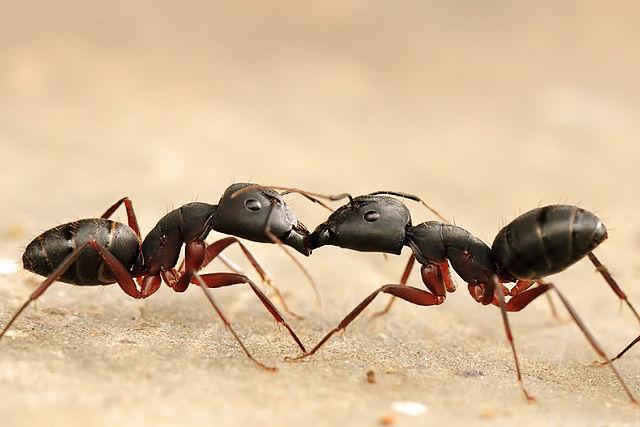 ("Trophallaxis in black ants" by Rakeshkdogra is licensed under CC BY-SA 3.0)

One of the aspects of ants that is most discussed is their ability to communicate. How do these insects work together with such coordination? Do they speak in tiny voices that we just can’t hear? Well, no, not exactly. Ants can “talk” to one another using chemical pheromones that are picked up by other ants in their colony to communicate messages related to getting food or even coordinating attacks. They also sometimes use touch and even vibrations to communicate, but for the most part ant language is all done through specific chemicals.

Ants seem capable of settling down basically anywhere; just a casual walk down the street and there’s a decent chance you’ll see a little mound of soil in the cracks of a sidewalk that signals “Ant colony here!”. This speaks to their diverse colony-building skills. Some will build mounds of soil, some will burrow underground, and some will even live in rotting wood or just hang out under a rock. Ants decide on where and how they’ll build their colonies based on what can provide the best environment for their larvae to grow, and once they’ve settled, they build complexly constructed colonies. These colonies consist of a complex series of tunnels and chambers where they can safely store food, eggs, and even their young. Some ant colonies even have ventilation systems to circulate fresh air! This time-lapse video does a good job illustrating what the construction of an ant colony looks like, from start to finish: 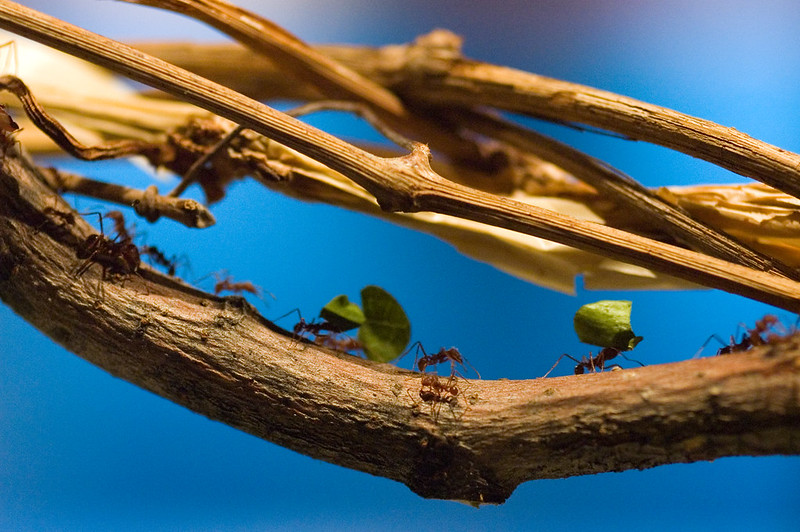 No, it’s not exactly your regular 9-5, but every ant in a colony has an essential role to play in perpetuating the existence of their colony. The Queen naturally spends most of her life laying eggs, but labor aside from the queen is largely determined by age. For example, younger worker ants spend most of their time indoors, taking care of the queen and her offspring, while older worker ants will venture out to gather food and defend the colony against potential threats. Interestingly, ants actually have some choice when it comes to the jobs they do: according to Arizona State University, workers, “decide which tasks to perform based on personal preferences, interactions with nestmates, and cues from the environment.” ("Ant Bridge Crossing" by Igor Chuxlancev is licensed under CC BY 4.0)

Naturally, any species that exists on such a communal level is going to be one that engages in a lot of teamwork, and ants are no exception. Ants are capable of processing information to solve problems as a group; in other words, they weigh options together and make decisions together, like the best place to build their colony. Ants also work as a group when defending their homes, teaming up and attacking any creature (including even mammals!) that they consider a threat. Ants will also work together to farm, collecting vegetation that they use to grow fungus gardens.

Of course, there is a darker side to these collaborative efforts: ants will also work together to wage wars against other ant colonies that are intruding on the territory that they have established as their own. Here’s an example of what those wars can look like:

Can’t get enough of ants? Check out our ant Pest ID page to learn all the different types of ants that are common in North Carolina.