Venomous and Poisonous: What's the Difference? 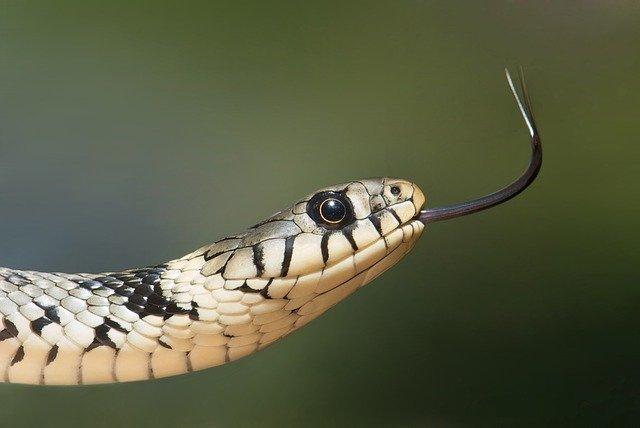 The words “venomous” and “poisonous” are often used interchangeably - or used as a catch-all to describe “bugs and animals I don’t want to be around.” But do you know the difference?

According to Britannica, “the term venomous is applied to organisms that bite (or sting) to inject their toxins, whereas the term poisonous applies to organisms that unload toxins when you eat them.”  While most people think of snakes as being poisonous, they are actually venomous because they need to bite you to inject their venom. Examples of poisonous animals include amphibians like frogs, toads and salamanders, which carry toxins on their skin to protect them from being eaten by other animals (or humans).

It’s pretty easy to avoid eating or licking frogs, but what happens if you come across a venomous snake?

In North Carolina, there are six kinds of venomous snakes, the most common being the Copperhead and Cottonmouth Snake. You can read more about dangerous snakes and pests here.

Snakes are most active between May and September, and they usually come out around dawn and dusk when the heat isn’t as intense. Copperheads can appear in both urban and rural environments. Though snakes don’t want to bother humans, they can move into human inhabited areas in search of food or shelter. If you see snakes in your yard, get rid of messy areas like wood piles, tarps or upside-down plastic swimming pools. You’ll also want to make sure they don’t have access to any food - including rodents - and pet or animal feed. Since snakes like cool dark places, make sure access to your basement or any crawl spaces are sealed. Check out more tips for managing snakes around the house here.

If you accidentally disturb a snake, they will usually try to get away from you, but if they do hold their ground, back away slowly.

How to treat venomous snake bites

If you can’t avoid being bitten, call 911 immediately. According to the Mayo Clinic, while you’re waiting for medical help:

In humans, venomous bite symptoms include:

Do NOT use a tourniquet, apply ice, cut the wound or attempt to remove the venom. And definitely DO NOT try to suck out the venom (this is a myth that is very dangerous). Similarly, if your cat or dog gets bitten, bring them to an emergency vet immediately and don't try to treat them yourself.

Read more about common spiders in North Carolina here. Some of the symptoms of venomous spider bites include an itchy, painful red spot or blister and reaction such as fever, chills, headache, nausea or vomiting. Especially if you see two puncture wounds you should see a doctor.

Another common venomous insect is the bee! Bees, wasps, hornets, and yellow jackets all contain venom within their stinger. This is what causes pain and swelling in the area. A mild reaction can result in a sharp, burning pain to the site, a red welt, and slight swelling. These stings don’t need medical attention and usually get better in a few hours.

If you’re allergic to bee stings, however, a sting could lead to a life-threatening reaction. Severe allergic reaction symptoms include:

You should seek medical care immediately if you have any of these reactions to a bee sting.

Similar to snakes, bees don’t want to bother humans, but will be attracted to food, water and shelter. To deter bees from your property you should maintain your yard, don’t plant flowers too close to your house and don’t leave out food or trash.

If you’re concerned about potentially venomous creatures in your house or yard, contact us for a free estimate. Although most animals do not want to attack humans, sometimes you want peace of mind, and that’s when you call A-1.